Top 5 US States With The Most Debt

As of August 2022, total personal debt in the US reached $14.69 trillion, as more and more people borrow money instantly and online as well as in store and through credit providers. The average American household currently owes around $137 thousand in debt, due to credit cards, mortgages, student and personal loans.

Whilst debt was never something someone just forgot about, as we near 2023 with one of the highest increases in the cost of living and the median income of American citizens only reaching $65,000, debt is becoming a growing issue for most of the US.

Americans will most likely find themselves paying off current debt far into the coming decades or even for the rest of their lives.

But, whilst Americans have to be concerned with their own personal finances, state run debt continues to impact everyday life, from taxes to infrastructure to health and education. So now more than ever, with the USA in one of its largest government deficits in history, the importance of understanding your state debt, assets and liabilities and how they affect your daily life, has never been more important.

As of the end of August this year, the federal debt of the United States of America equated to $30.85 trillion. Like many other countries, the USA has to maintain the national debt to continue running. It costs $589.5 billion yearly to maintain the debt, 12.30% of federal spending, and the national debt has increased every year for the last ten running. Much of this debt is due to state running.

However, some states are clearly struggling more than most. Let’s have a look at the top five states with the most total money in debt.

Unsurprisingly, it’s the US’s most famous state that holds the prize of the highest debt of any of the total fifty. Interestingly, in New York, payday loans and other forms of similar lending are illegal, unlike other states like Texas and Ohio. New York’s total debt now reaches over $203.77 billion, with its total assets equating to $106.61 billion, therefore coming out with a debt ratio of 273.8%.

Although cost of living and infrastructure costs add to the growing number, New York’s main culprit for growing debt comes in the form of healthcare. Overspending on Medicaid, the nation’s public health insurance program for people with low income, now estimated to cover 1 in 5 Americans, still acts as the main reason that New York wins the unlucky prize.

However, through cutting school aid and health care costs in recent years, and with the plan to continue, New York is hoping to fill the budget gap and relinquish its crown.

Next comes New York’s brother city, New Jersey, taking second place as the US state with the highest amount of debt. New Jersey’s total liabilities comes to $222.27 billion, far superior to the state’s assets that sit at $198.67 billion, thus creating a 441.7% debt ratio.

The state’s debt reaches its height mainly due to the state’s unfunded benefit and pension system for public employees. The scheme puts New Jersey in public debt each year, however no plans have been made to change it.

New Jersey instead looks towards tax increases. Legislators of the state encourage the rise of income tax due to the building pressure by citizens to prioritise other forms of welfare, such as education and infrastructure. However, with personal debt on the rise, more people will also naturally turn towards using loans for people with bad credit to help bridge the gaps in their finances.

Moving away from the East Coast, the number three spot goes to the Prairie State, Illinois with payday loans in Illinois as well as overall debt on the rise. Illinois’s total assets of $53.05 billion, paired with a total of $187.7 billion in unfunded liabilities, create a debt ratio of 468.7%, the largest in the USA across all states. Illinois total liabilities reach $248.67 billion.

With its great population, Illinois’s citizens would each have to contribute $14,780 out of pocket to reach an equalizer, but with no plans to change the amount required for worker benefits, Illinois is likely to remain in major debt for years to come. 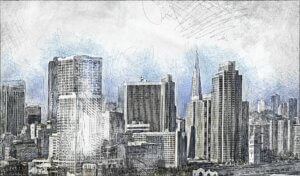 Illinois, including Chicago has one of the highest rates of debt in the USA

Travelling back to the east coast once more, Massachusetts sits as the fourth highest state in debt across the United States. Massachusetts’s total assists of $34.214 billion are greatly outweighed by its total liabilities of $104.53 billion, giving the state a total debt of just over $68.43 billion and a debt ratio of 305.5%.

9% of the state’s bridges are rated structurally deficient, Massachusetts’s roads require every driver to pay an extra just under $1000 per year and over 300 dams are considered to be high-hazard potential. On top of the high cost for infrastructure, Massachusetts also owes its 4th place to debt required through pension schemes across the state, often described as ‘crisis-level’.

Finally, in the fifth spot of highest debt across states sits the only western state in our list, California. California’s total assets come out to $301.1 billion, with the total liabilities coming to $362.87 billion. The state has a $55.96 billion net debt and a ratio of 120.5%, the lowest in our list but far above the average state.

California’s state debt occurred mainly due to budget borrowing for use in many aspects of state running. Most of the borrowing is used for education, currently over 50 percent of dollars support California’s public schools and university systems. Although the state’s budget has significantly improved in the last year, it still expects to work at a deficit up to and possibly past 2025.

What Does State Debt Mean For Borrowers in the USA?

Although New York, New Jersey, Illinois, Massachusetts and California sit at the top of US state debt, many other states follow close behind with severe debt issues. As of 2022, no state lives debt free. Even the states in the best position debt-wise, Texas, Florida and Alaska, hold a 50% average debt ratio, with people borrowing money in all forms, ranging from $500 loans to much larger loans and credit commitments.

With legislation and budget plans changing every year, the list is ever changing. And as the United States recovers from the previous years; the large unemployment issue, the change to the federal office and the monetary drawbacks from the vaccine rollout, it is hopeful that soon some of the country’s debt can be plateaued.